We had the good fortune of participating in the first of Zoubi’s new offerings, planned to be held monthly – the Chef’s Tasting Menu with Drink Pairings. All told, an extravagant meal experience consisting of, I think, 12 different food items.

(In case you don’t read the entire post, keep an eye on Zoubi’s Facebook page to learn when the next Tasting will be.)

We learned afterwards while talking with Elizabeth Bordner (Liz), the General Manager of Zoubi, she and Chef Justin McClain worked together to create the dinner. She chose the drinks for each course while McClain crafted courses to complement the drink. As it turned out, every food item we were served mated perfectly with the paired drink.

The night started with an explanation of what lay ahead with a little history of the vineyards and vintners. As we progressed through the meal, they described each drink, it’s characteristics and why it was chosen.

On to the food!

You’ll probably notice that the menu “only” has 9 items. McClain actually gave us three amuse bouches to keep our palates entertained while we waited for the meal to commence.

We started with an oyster on the half-shell. No explanation needed there :-).

This was followed up by a tuna toro cone – for those unfamiliar with toro, it’s the premium cut of tuna, from the belly, fattier than the standard red tuna you’re probably used to. The extra fat in the fish is prized as it gives the fish a buttery texture and additional flavor. This was an unexpected treat! McClain lightly seasoned the tartar in the cone, allowing the natural flavors to carry the dish.

After that, they gave us a grilled chunk of Cobia. Cobia is a fish that has a sweet meat like a salmon and an appearance when grilled something like swordfish. That was a yummy treat that whet our appetite for the main courses we anticipated.

Our first “real” course was called “Mainly Mushrooms,” which in fact, it was. From a presentation perspective, it was the star of the night – beautiful colored mushrooms, glossy with a little sauce, presented simply on the plate. And yes, you see some black truffle slices on the plate too. Not something you see often enough.

The mushrooms were paired with a rose sparkling wine. The pairing was perfect. The dry, but not overly so, “Champagne-like” drink complemented the natural flavors of the mushrooms.

The mushrooms were followed by sous vide cod cheeks with crab in a light fish brodo (i.e. broth). This was accompanied by a slender pasta – a perfect match IMHO for the fish and crab.

This dish begs a couple questions: 1) what is sous vide; and 2) what are cod cheeks?

Sous vide is cooking in a temperature controlled water bath, usually with the food sealed in a vacuum sealed plastic bag so that the water heats the food without the water coming in contact with it. It allows precise cooking while sealing in juices. It’s become all the rage because it works so well at creating perfectly cooked dishes. Here’s a short article on sous vide cooking.

And cod cheeks? They’re tender little morsels of cod meat, from the, you guessed it, cheeks, of the fish. Usually they’re just discarded when the cut the head off the fish, but they’re actually delicious. Try them if you ever get a chance.

This dish was paired with a tasty Chardonnay. Again chosen for it’s flavor profile that complemented the seafood, enhancing the overall dish.

As the meal progressed, so did the boldness of the flavors, allowing our taste buds to adapt without being overwhelmed by the previous dish. This seemingly obvious rule is unfortunately violated in many multi-course meals, leaving one’s mouth and brain confused by the disharmony of flavors. Chef McClain clearly took much care in designing the  entire meal to flow harmoniously. Kudos!

Now we moved on to the “Classical Mess” – a beautiful trout with scallop mousse and fiddlehead ferns. It would be easy to mistake the trout for salmon in texture, but the flavor of the trout was significantly more subtle than most salmon. As with all the items, preparation was perfect, leaving the fish juicy. Honestly, I don’t know how you serve a patio full of guests and have everything come out perfectly. I have a hard enough time preparing a dinner for 4! 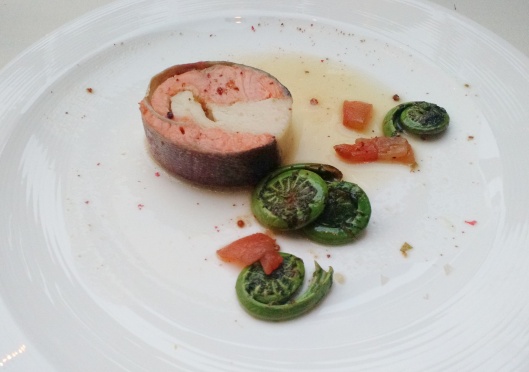 There’s something about fiddleheads that I find adorable. They’re delicious little snail-like vegetables that are rarely available. They add a whimsy to the dish that seems to enhance the food.

Before switching from fish to meat, they served an Intermezzo to cleanse the palate. McClain surprised us with a gazpacho shot. They didn’t tell us what was in it, but from the flavors, it seemed like it had watermelon, mango and cucumber. I could have sworn mine had a tiny bit of chili oil, though others at the table didn’t think so. Whatever it was, it was refreshing and served its purpose as well as giving us something to talk about while we anticipated the next dish…

The Standard was a generous course considering the number of items we were eating. As you can see, this was almost a meal-sized hunk of buttery-tender beef, served with fries and asparagus. 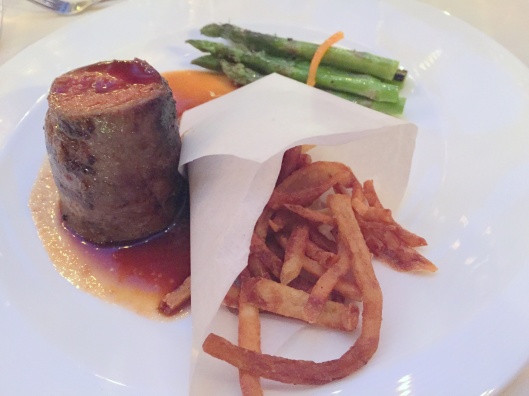 The Standard was anything but

What you can’t see is the perfect pinkness of the meat. The outside was slightly seared and the inside kept at medium rare – the way beef was meant to be served! Given its perfection, I have to guess that McClain sous vide cooked the meat then seared it for serving. It was just too perfect for a standard preparation.

This was paired with a peppery Cabernet.

Now for my only food quibble – the fries. McClain set what seems like an impossible goal when serving a large group – keeping ultra-thin fries warm and crispy for serving. While the preparation is a beautiful golden brown, fries this small always get cold before hitting the table, or certainly within a minute or two after. Honestly, given the number and complexity of all the dishes, I feel foolish even for mentioning this.

The next course was called “Butter” – an apt name for braised short ribs. Unfortunately, I have no photo for you. The night was getting dark and I didn’t want to start taking flash photos out of courtesy for the other diners.

The short ribs were amazing, as only short ribs can be, but rarely are. They were tender and flavorful, served on exquisitely smooth mashed potatoes with a delicious sauce. I couldn’t stop raving about this dish. I am a huge fan of braised short ribs and would gladly order these in a full entree portion.

One of the things that made these short ribs so good was that McClain wasn’t depending on the huge fat slab the way most short rib presentations do. It was delicious with just enough fat to enhance the flavor. I’m still smiling thinking about this dish.

This brings us to the “Gluttonous” course of pork belly paired with the silky-smooth Glenlivet 15 year single malt Scotch whisky. 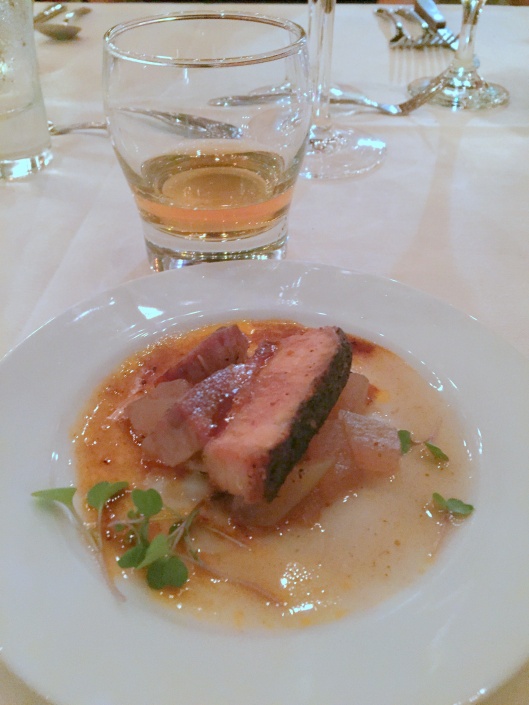 Take a close look at that pork belly – again McClain resisted the temptation to include the thick fat layer that others often include. Instead, you have a tender piece of pork with just enough fat. As with the short ribs, Chef let the meat carry the flavors rather than assaulting the eater with fat. Thank you Justin! This is another dish that I would gladly order as an entree.

Upon finishing our pork belly, we all needed a breather. The crescendo of flavors (and alcohol!) left everyone boisterous and happy. Everyone had huge grins on their faces, clearly enjoying the night immensely.

Anyone who has met McClain gets a sense that this is a guy with a sense of humor. The next course, the “Crunchy Hipster” is his wink at the diners.

And indeed, the salad was crunchy and tasty, as was the house infused (by Liz) bourbon. The bourbon was a first for me. If I drank more frequently, I’d definitely get attached to Liz’s infused bourbons.

The finale was the cheese plate. Chef McClain takes his cheese seriously. Really seriously. Just as we were getting ready for a boring final dish (boring after the short rib and pork belly), he gave us the amazing “Last Call.” OMG. The flavors. The duck proscuitto and the cheeses. This was a final jolt of excitement – everybody just sat there and savored the flavors of the cheese and duck, raised to another level by the Tawny Port. At this point, we were in something akin to a post-coital bliss. It was then that I heard the line of the night from a satisfied diner: “That was really f*ing good!”

From what I saw, ate and drank at Zoubi, Chef McClain and the Mistress of drink, Liz, made a lot of friends tonight. The premiere Chef’s Tasting and wine pairing was a huge success!

Before you kick yourself for missing the special tasting dinner, know that Zoubi plans on doing these dinners monthly. So you’ll have chances to experience it for yourself. “Like” their Facebook page to stay in the loop.

Dining Along the Delaware – Hidden Gem post based on my first visit to the “New” Zoubi Restaurant and Bar.