The Farm Cooking School is what you get when you combine world-class chefs, avid foodies and the farm culture along the Delaware.

We are incredibly fortunate to have this gem, hidden in our backyard. In fact, I was happier to find the Farm Cooking School than I would have been if I stumbled upon a real diamond in my lawn. After all, learning how to cook is gives me a skill that I will enjoy for the rest of my life, while a diamond is just pretty to look at.

The Farm Cooking School is exactly what it’s name implies – it’s a cooking school that’s on a farm, Tullamore Farm, to be exact. But unlike many cooking schools that are reserved for elite students planning on becoming chefs, The Farm Cooking School caters to foodies – people like you and me, who love great food and want to take the next step – learning how to make it themselves.

While it’s been advertised, I didn’t really appreciate the significance of the Farm Cooking School until I had a life-changing pizza. Wait, what? Yes, a pizza!

You see, Ian Knauer and Shelley Wiseman participated in Guest Pizzaiolo series at Liberty Hall Pizza where they created the best pizzas I’ve had in years. After feasting on those pizzas, I had to learn more about the chefs that created them. Thus I stumbled upon this amazing cooking school.

Who are Ian and Shelley? Check out these bios, stolen from their website:

Ian honed his cooking skills in the world-renowned test kitchens of Gourmet Magazine for almost a decade before returning to his family’s farm in Pennsylvania where he wrote a cookbook (The Farm: Rustic Recipes for a Year of Incredible Food) and a television show, also called The Farm, which airs on PBS and Hulu.

Shelley Wiseman met Ian at Gourmet Magazine where she was the magazine’s Travel Food Editor and a recipe developer for 12 years. Shelley is the author of two cookbooks, her latest is Just Tacos. Shelley has cooked and taught cooking all over the world including her own cooking school in Mexico City for 6 years where she taught French Cuisine. After a stint running the kitchens at Fine Cooking Magazine Shelley is back to doing what she truly loves, teaching and collaborating about great food.

These bios only scratch the surface. They don’t mention how Ian expanded his skills in kitchens around the world. And nothing can capture the depth of his love for the art of cooking. Nor do they give you a full appreciation for Shelley’s true skills and knowledge, gleaned from decades of hands-on experience cooking and teaching. Together, they’re truly a formidable team.

I couldn’t believe how fortunate I was. Here, on a little farm just a few minutes from home, is a cooking school taught by these incredibly talented chef-instructors. I ride by it almost every day on my daily bike rides! How cool is that?

After I got over my initial awe of having this unique resource so close to home, I checked their schedule and signed Evy and I up for the Foundations of Cooking class. While I’ve enjoyed cooking for years, including some relatively advanced techniques like sous vide, I knew that the depth of my knowledge was poor. I had to start at the beginning and learn the foundations. 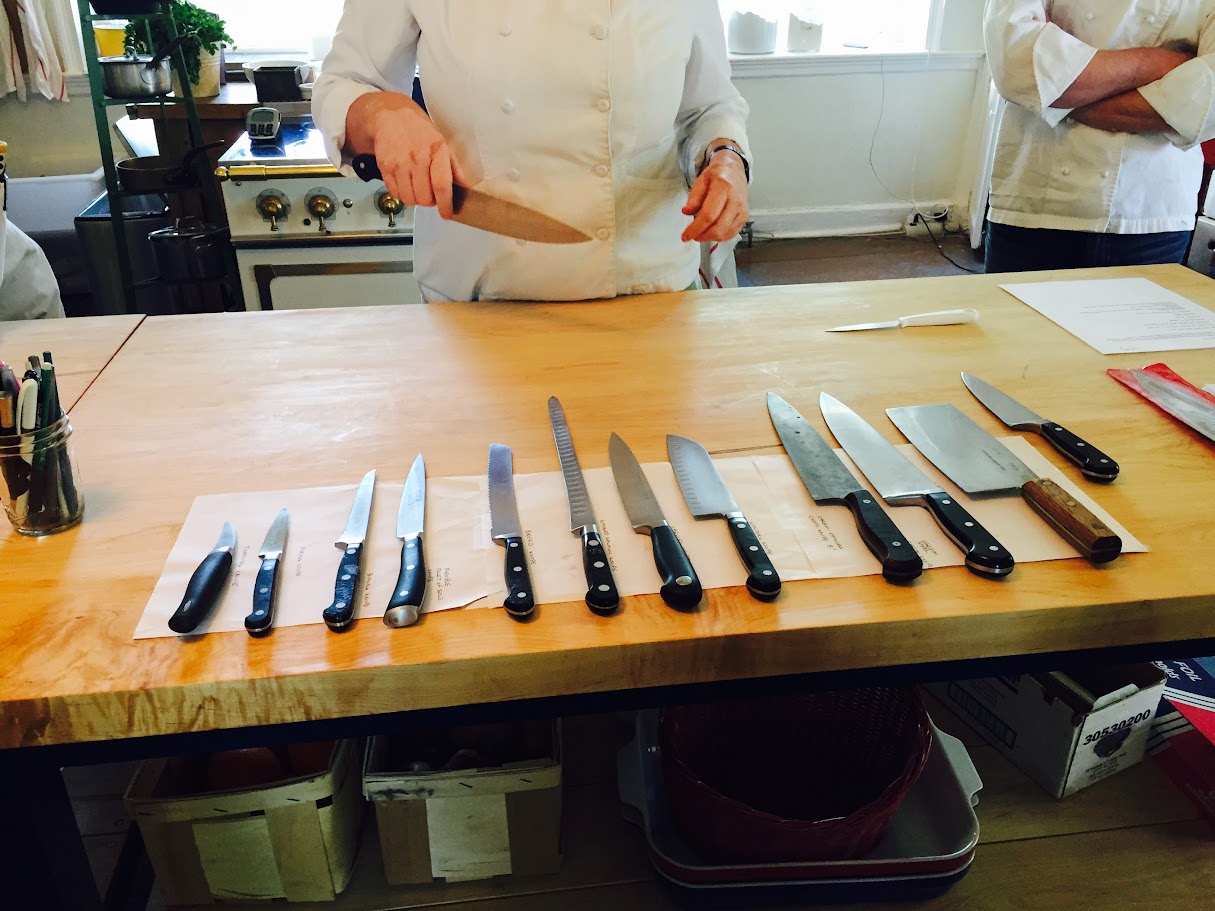 Ooh, I get to play with knives!

As of this writing, I’ve had two classes – knife skills and searing/deboning, which have already elevated my skills substantially. My knives are now much sharper (I thought I knew how to sharpen them…), I’m chopping faster and more safely, and I’m actually sautéing things correctly. Even basic things that I learned on the side proved immediately useful. Like how to properly use a lemon squeezer (duh – I’ve been doing it wrong all along).

On top of learning techniques, each class culminates with a multi-course meal, prepared using the ingredients we just learned with. Serious meals, that one would pay almost as much for in a restaurant as the class cost. For example, in the second class we prepared and ate the following meal: 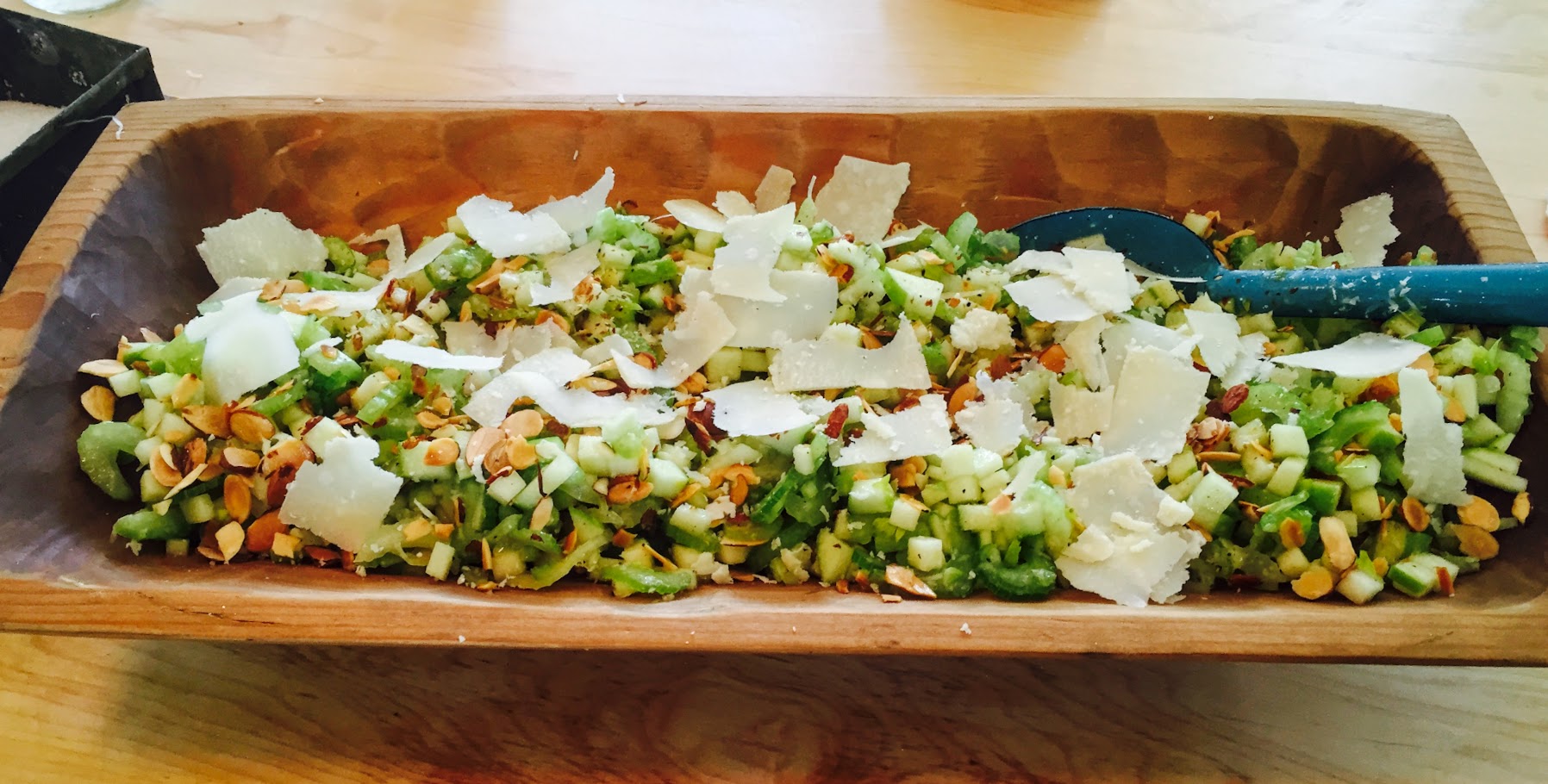 The apple-celery salad we made for the first class

And we’re not just talking about little tasting portions. The breasts must have been at least 10 oz. and we each got two, large sea scallops on our salad. Like I said – a serious meal.

But there’s so much beyond learning techniques and eating good meals that I’m getting from the classes. Heck, if I just wanted to see how to sharpen a knife or sauté a chicken breast, I could watch Youtube videos. I’ve done that before, many times, and while the videos are useful, there’s nothing like having a “real” chef guide your hand – “try slicing that way and the knife will cut better.” And no video can give you the tactile experience of actually boning a chicken then sautéing it to perfection.

Now that I’ve had a chance to cook and eat some meals alongside Ian and Shelley, I’m just starting to learn about their life-long passion and respect for food and farm culture. They have it in their DNA, and that drives their passion to teach others so that they too can enjoy food at a whole new level. I know that I do.

The great thing is, you can too. There are participants in the class who commute from New York City. And The Farm School provides several class series as well as allowing people to sign up for all or just one class. Here’s the calendar.

A sampling of the great classes they offer:

Even if you don’t consider yourself a chef, and you just want to enjoy great food and the company of other foodies, it’s worth taking their courses. You’ll have a great time, enjoy amazing fresh food, and makes some friends. And you might just learn something in the process 😉

Now that you’ve read about it, check out the video

Bios of the chef-instructors – Ian Knauer and Shelley Wiseman

The Farm – Ian’s show on PBS. The Promo video

The Farm – Rustic Recipes on Amazon