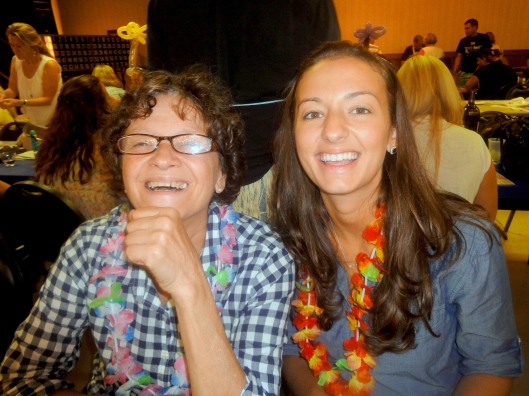 Carla and Jamie enjoying some time off at FACT Bingo

Duck Soup Café epitomizes “hidden gem” – it’s hidden between a row of nondescript professional spaces in Logan Square (Giant shopping center), and it’s a real gem – frequented by other restaurateurs and local celebs. In fact, I almost hesitate to bring attention to Duck Soup out of a fear that popularity could ruin the nature of the place, filling it with outsiders 🙂

It was only after living in New Hope for years that Evy and I discovered Duck Soup and became acquainted with Carla Fuentes and her family who pour their hearts into the Cafe. But shortly thereafter, we became true fans – of both the food and the people.

Much like New Hope, Duck Soup hearkens back to the things that we fondly remember from times past – family, relationships, and genuine people. From the moment we walked in the door, we knew it was a special place, decorated with photographs and paintings by and of locals who themselves have touched many hearts in this small community. People like Jim Hamilton, the renowned restaurateur and  John Larsen – of John and Peter’s (the first Hidden Gem featured on these pages). Posters from the band Ween adorn the men’s room, often accompanied by lead man, Mickey “Dean Ween” Melchiondo, enjoying some of Carla’s food. Yes, it’s places like this that inspired the show “Cheers” and all that it represents. And it’s why we love living in New Hope.

But what of the food? That too tastes like our fondest memories. It reminds us of what being a foodie is really about. Carla can be seen collecting tomatoes and figs from her own garden out back or carrying a quiche fresh from the oven. The place carries the aromas of the sweet (her pecan sandies melt in your mouth) and the savory (roast lamb anybody?) adding to the allure. Just thinking about it makes me crave my next meal there.

This is real food. Carla doesn’t go for the trendy. But you know that the moment you walk in the door. She serves up delicious food, prepared simply and correctly. Her crab-cakes are the best around – the gold standard by which we judge them everywhere. And her burger is perfection, as is the aforementioned lamb. And her mulligatawny soup is simply spectacular. And even after eating numerous fish tacos in Florida, I still craved hers which have the perfect blend of crisp fish and spicy flavors.

The only unfortunate thing is that Duck Soup is only open for dinner on Fridays. But we understand why – it’s open for breakfast and lunch every day, and Carla needs some time to recover. In fact, I don’t know how she manages – on her feet all day, cooking, cleaning and running to the market, yet still making time to pull up a chair and chat with the regulars between dishes – she’s truly remarkable.

Once you’ve come here a few times you see what keeps her going. Her family – husband Lino and daughters Michele and Jamie are often waiting tables, helping to ensure everyone is happy. But I think it’s the extended family, Duck Soup’s regulars, and their love for the Fuentes family that really keeps the place thriving.

So whether you’re a local, looking for a comfortable place to enjoy a sandwich on the patio or a visitor wanting great pancakes before a day of antiquing, you can’t go wrong at Duck Soup. Say hi to Carla and tell her Ted & Evy sent you.

You can find Duck Soup hidden behind the offices at the left end of Logan Square. Look for Wild Ginger and the hidden drive to the left (as viewed from rt. 202) – here’s a map: