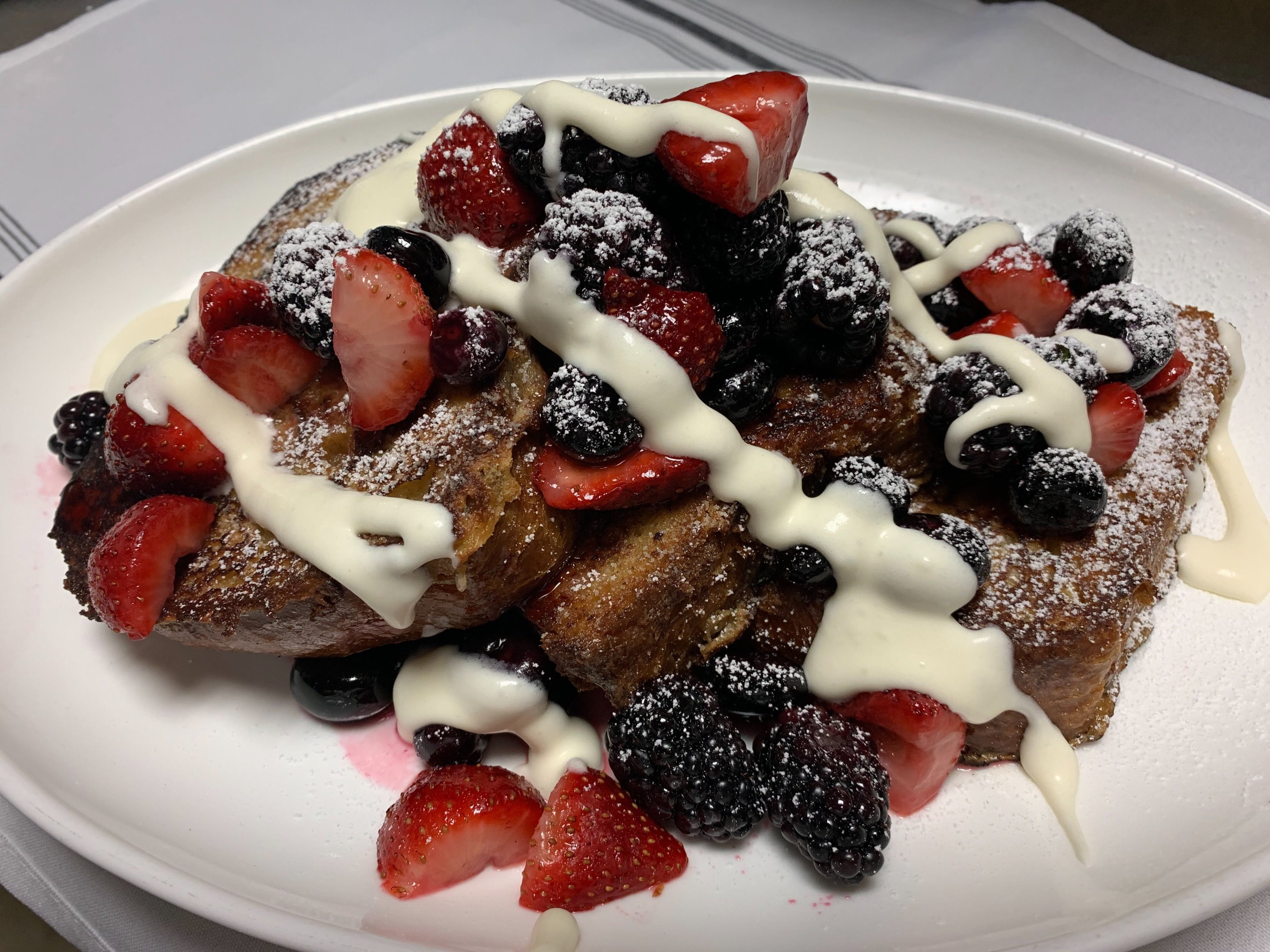 With the sad passing of Jim Hamilton, we lost a legendary man. Jim was admired and respected, both for what he created and for all he contributed to our area. Many local chefs started in Jim’s kitchen or under his tutelage, going on to make names for themselves – carrying on our region’s foodie tradition by propagating Jim’s legacy. Not to mention his famous daughters, Gabrielle and Melissa, each known globally for their culinary contributions.

Many worried about what would happen to Hamilton’s Grill Room without Jim’s  presence. But that fear turned to excitement when we heard that Jim had passed the baton to Chef Brian Held (of Brian’s restaurant and Bistro Rouget).

If you read my post about Brian’s, you know how much I respect Chef Held. In a  region with hundreds of restaurants, Chef Held’s restaurants consistently rank among the best. But can he do it again at Hamilton’s?

END_OF_DOCUMENT_TOKEN_TO_BE_REPLACED

In our party circles, I’ve become known as “the ice cream guy.” Few foods are as universally liked as ice cream – especially great ice cream. It took me a long time to get to this point, but now I’m ready to share my secrets.

In reality, like most tasty food, the key is to start with high quality ingredients. You can grill a steak perfectly, but if the meat isn’t fresh and tasty to begin with, you’ll never end up with a juicy, mouth-watering, steak on the dinner table.

Ice cream is exactly the same.  You’re going to taste each ingredient because there are only a few ingredients in ice cream. So you only want use ingredients that taste really good! But I’m sure you know that. More likely, you’re reading this because you are having some of the same problems I have run into when making a batch – icy ice cream that lacks that depth of flavor that makes people really smile.

END_OF_DOCUMENT_TOKEN_TO_BE_REPLACED

Aztlan raises the bar, serving up a huge variety of Mexican and Tex-mex dishes, both familiar and new. Chef/owner Edgar Castro, who was the chef at the popular Tortugas before buying the restaurant, has crafted a new menu. The dishes, heavily influenced by his youth in Mexico City, artfully melds dishes and flavors from all over Mexico as well as retaining many of the familiar Ameri-Mex that we’ve all come to know.

In fact, Aztlan has done something so special that they received a “very good” from the New York Times food reviewer. The Times is known for their tough reviews, so this is high praise! Based on our dining experiences at Aztlan, they’ve earned their accolades.

END_OF_DOCUMENT_TOKEN_TO_BE_REPLACED

It’s not often that a restaurateur chooses to reinvent an already successful restaurant. But that’s exactly what Brian Held, chef-owner of Brian’s in Lambertville and NoLa in Stockton has done. The new (May 2016) Brian’s has melded the best of both restaurants into his eponymous restaurant in Lambertville creating a wonderful new and unique fine dining experience.

We applaud Brian’s thoughtful evolution. While Stockton is a charming town for NoLa, we feel like Lambertville is the right location for his flagship offering. With convenient parking and its central location, Brian’s is an easy destination for more diners. I know we’ll be coming more often!

END_OF_DOCUMENT_TOKEN_TO_BE_REPLACED

Welcome to all the great folks I’ve met at The Farm Cooking School as well as my other foodie friends!

Here’s the fabulous Lincoln-Mercury video featuring The Farm Cooking School with narration by Chef Knauer and a cameo (in the red shirt) by your humble author.

Here’s some links to areas of Dining Along the Delaware that you might find handy:

Articles and press about The Farm Cooking School

Resources page – lists of local CSAs, farm stands and markets, ethnic markets and other things of interest to local foodies.

Resource map – a map containing the items on the resources page so you can see what’s near you.

BYOB’s – restaurants without bars that permit you to bring your own alcohol.

Daily specials – dining specials for local restaurants. It’s pretty tough to keep these up to date so please post comments about others you know about or changes that may have occurred.

Remember to join our Facebook group: Dining Along the Delaware for the latest info.

Note: ad blocking software seems to prevent loading the photo albums so if you want to view the albums, you have to disable ad blocking.

One of the most popular desserts I’ve made was this decadent chocolate tart with salted caramel topping. This was inspired by several different recipes and desserts. Probably the most similar is the famous salted caramel tart served by Frenchtown, NJ restaurant, Lovin’ Oven. However, the starting point for this recipe was the “Perfectly Simple Dark Chocolate Tart” in Lori Longbotham’s book, Luscious Chocolate Desserts which is well worth the investment if you’re into chocolate (and who isn’t?)

In this version of the chocolate tart, I changed a few things to adapt it to my tastes.

Be forewarned – this is a *very* potent dessert! For maximal enjoyment I suggest slender slices. You should be able to get  (correction) 24-32 slices from this tart! You may also wish to eliminate the caramel. I keep going back and forth between desiring its added flavor and being overwhelmed by the extra sweetness.

END_OF_DOCUMENT_TOKEN_TO_BE_REPLACED

Have you ever felt like you’ve missed out on years of joy after “discovering” something that others have known about forever? Tonight, Evy and I kicked ourselves, because we’ve missed out on so many amazing meals at Brian’s in Lambertville, NJ.

That name probably sounds familiar because last week I wrote glowingly about Chef Brian Held’s new place, NoLa, in Stockton, NJ. After having such a great meal there, and spending some time with Brian himself, Evy and I decided we had to head over to Brian’s eponymous restaurant in Lambertville.

Before going, we checked out some other reviews of the place. In particular, this review in the New York Times caught my eye. When the first line of a review talks about setting out for Lambertville, in the rain, for a fondly remembered dish, you have to take notice. In this case, the dish was sweetbreads Milanese, something I normally would not eat. But tonight, I made an exception… END_OF_DOCUMENT_TOKEN_TO_BE_REPLACED

The Lambertville area has become a true foodie destination with many excellent restaurants representing cuisines from around the world. El Tule continues this tradition, embodying the diverse cultures of Mexico and Peru.

Evy and I have been huge fans of this family run restaurant ever since it opened in 2011. And we’re not the only ones. In its first year, El Tule Mexican & Peruvian Restaurant rose to the top of Yelp and TripAdvisor ratings and remains among the highest rated restaurants in the region. In 2014, the New York Times visited, and posted this flattering review.

What is it that makes El Tule, and its sister restaurant, Quinoa (in Doylestown, PA), so special? In a word – passion.

END_OF_DOCUMENT_TOKEN_TO_BE_REPLACED

In my quest to find and bring you all good things related to food in the Delaware River region, I decided to change course from my normal restaurant hidden gems and found myself at the Cookery Ware Shop in Lahaska / Peddler’s Village.

I “discovered” this hidden gem a few years back when I was looking for some cast iron pans. What I found was an amazing collection of essential items for chefs of all levels, from the beginner to the seasoned professional.

In this day of instant Internet gratification, it’s so easy to just click a button and place an order that I often forget about local retail stores. But when it comes to items for my home, there’s nothing like putting my hands on them. If I’m buying a knife for potentially hundreds of dollars, I want to feel the curves of its handle and feel its heft. I want to see its exact shape and size. Do I need a 6″ or 8″ blade? I need to handle it to see what’s right – something I’m not going to get from the Internet. For items like these that I’ll use constantly, I want them to be “just right.” That’s where the Cookery Ware store comes in.